Here are some of the display case woodworking projects I have made over the years.

Display Box – Made from bird’s eye maple to hold award pins and other small items. 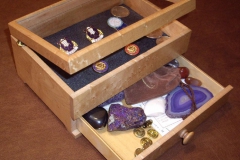 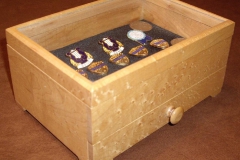 Dresser-Top Valet – Made in 2006 from cherry.  The top is green leather.  The original plans were from Wood Magazine, but I thought it was too big so I scaled things down about 2/3.  A nice place to drop my watch, wallet, change, and cell phone for the evening.

Earring Case – Made from curly maple.  Plans from Wood Magazine.  The plans called for rather expensive concealed barrel hinges, but I substituted standard hinges.  Seems to work OK. 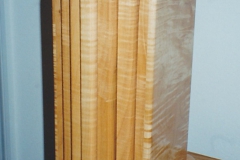 Necklace Case – Wall-hung cabinet made in 2006 from ash.  The wood came from a tree in my backyard that I had cut down several years ago. 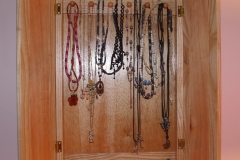 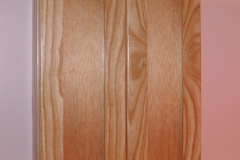 Recipe Box – Made in 2006 from laminated cherry and oak scraps. 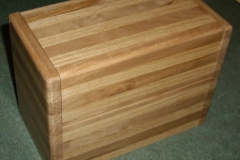 Flag Case – One of two identical cases I made in 2013 for my father’s and wife’s father’s memorial flags.  Made from walnut with maple splines.

Millennium Falcon Case – Back in 2007, Lego produced the Ultimate Collector’s Edition Millennium Falcon model 10179.  Although this kit is no longer available, the plans are available online and I was able to source all the individual parts on bricklink, with some color substitutions to keep the costs reasonable.  My son and I had a blast making this over the course of about a year.  After it was done, we needed a place to display it, so I made this case from pine and some thick plexiglass.  The bottom floor is mirror tile.  The little LED spotlights that illuminate the model are from ebay.  About the time we had this all done, Lego issued a new UCS 75192 version when the new trilogy was released. 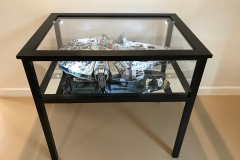 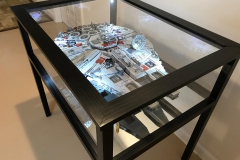 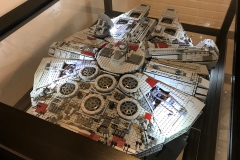 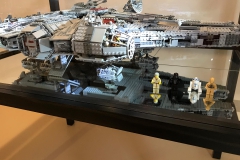 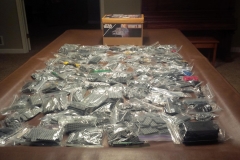