How many times do you have some gooey, oily, or sticky mess in your hands when you’re cooking and need to throw it into the trash can, but you have one of those inside-the-cabinet mounted trash bins that’s currently closed?

(a) put the mess down in the sink and wash or wipe off your hands before opening the trash bin
(b) use your foot to try to pull open the trash bin, and probably fall down or drop what you’re holding in the process
(c) get the mess all over the handle and wipe it off later

(d) ask Alexa to open the trash bin for you 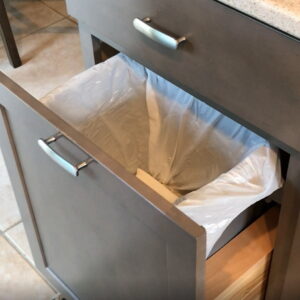 My solution started by hacking a Kasa HS100 Smart Plug to allow remote actuation of the on/off button. A screw under the the label is removed and the case is carefully snapped open. Then a couple internal screws are removed and the circuit board is freed from the case. The terminals that are closed when the momentary switch on the board is actuated were found and a couple thin wires were added. The wires were spliced to a thicker gauge wire and a dab of hot glue was added to hold things together before being routed out a hole drilled into the side of plug’s case. Now an external momentary microswitch can do the same thing as pressing the switch on the front of the plug. 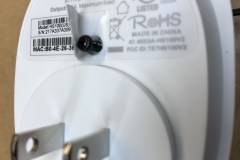 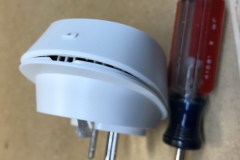 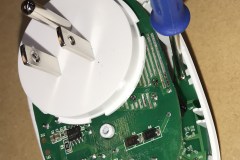 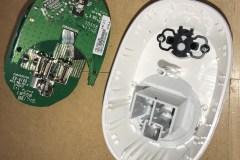 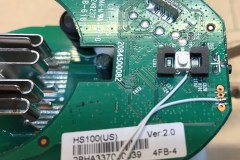 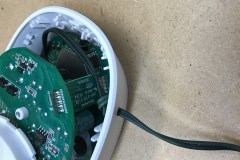 To power the opener, the gearbox from this Thingiverse post was used. The gearbox as designed was quite noisy and some of the gears were a somewhat wobbly on their shafts so I modified the design to add some small ball bearings to the gears in question, which made things a lot quieter. Two sizes of bearings were used: 606-2RS (17mm OD x 6mm ID x 6mm thick) and MR126-2RS (12mm OD x 6mm ID x 4mm thick). I put my modified gear STL files on Thingiverse too. The gearbox’s 775 type motor runs on about 9 volts DC supplied by a transformer. 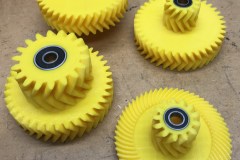 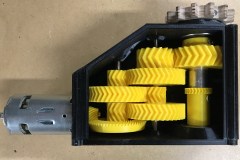 The gearbox output shaft gets a 13 tooth wooden gear, which drives a 39 tooth gear attached to the turntable assembly. The turntable assembly has a stack of bearings on top that go around to push open the wooden trash can frame. The momentary microswitch that was added to the Kasa HS100 is tripped by a small aluminum tab that runs by when it turns. Everything is aligned to that the stack of bearings stops dead center in the back of the cabinet when the cycle is complete.  Note that the trash can still can open manually by pulling on the handle, since the stack of bearings is always at the back of the cabinet unless it’s activated and running through a cycle. 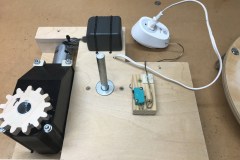 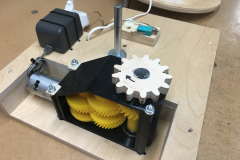 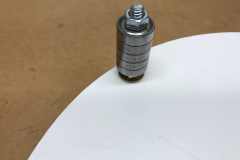 A hole was cut into the bottom of the cabinet where the trash can is mounted and an electrical outlet was added. In my case, there was already power present in the cabinet so it was very easy to add an outlet. The completed mechanism fits nicely in the new hole and the HS100 plugs into the outlet. 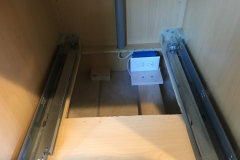 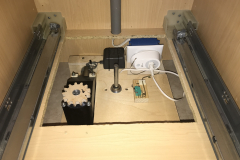 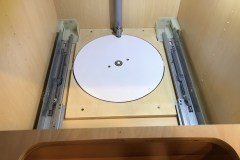 My Amazon Echo is simply programmed with a routine that recognizes the spoken phrase “open trash can” and turns on the HS100. The HS100 powers the transformer and the gearbox begins to turn. The turntable goes around and pushes the trash bin open. When the microswitch is actuated by the blade, the HS100 turns back off again just as a the mechanism completes its revolution. As a safety measure in the unlikely event the switch isn’t actuated for some reason (the switch goes out of alignment, the switch breaks, etc.), the Echo routine sends an ‘off’ command to the HS100 after 15 seconds – this would prevent the turntable from spinning endlessly if the switch ever failed.

Here’s a video of the whole thing operating, along with some views of how the mechanism works.